We are pleased to publish this blog article from Robert & Mary Carey of the RMWorldTravel radio program. Robert and Mary will provide us monthly blog articles covering their different favorite travel destinations. This month, they’re taking a look at Albuquerque, New Mexico.

How many American cities can you think of that have a four-season climate but the seasons are all fairly mild? Not too many, but Albuquerque, New Mexico is one of them! The sun shines more than 300 days out of the year on average in Albuquerque with low humidity which helps keep the winters mild. Visitors are able to enjoy outdoor activities year-round in this capital city. 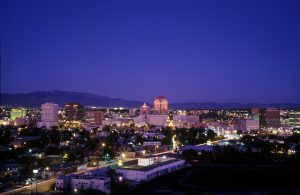 Albuquerque is one of those destinations that captures the heart and leaves an indelible image in the traveler’s mind. The sunrises and sunsets appear like paintings across the sky with colors so vivid, you almost can’t believe they’re real. If hot air ballooning isn’t your thing, you can still get those great sunset and city views with the Sandia Peak Aerial Tramway which climbs to the 10,000-foot peak of the Sandia Mountains. If you’re a skiing enthusiast, most travelers are surprised to learn that you can ski or snowboard in fresh snow during the winter season at multiple locations surrounding Albuquerque.

For golfers, Golf Digest and Golf Magazine have ranked several Albuquerque courses among the best in the country. With backdrops of sleepy volcanoes, rocky mountain peaks and the Rio Grande, there aren’t too many other areas in the U.S. that can compete with the views. Another positive is you’ll find golf is quite affordable in the Southwest compared to other areas in the country.

2018 has been good to Albuquerque, as the city has been named “50 Best Places to Travel in 2018” by Travel + Leisure, “One of the Best Small Cities” by National Geographic Traveler, and “Top-10 Most Affordable Vacation Destination” by Smart Asset. From the city’s Spanish roots and diverse native cultures, flavorful foods, engaging museums and an abundance of outdoor adventures available year round — plus we can’t forget its popularity for hot air ballooning — Albuquerque gives visitors an authentic experience of the Southwestern United States.

So pack your Travelpro, and think Albuquerque, as we highly recommend this great southwest city and be prepared for a ‘little’ chile in your food! Safe and Happy Travels!