Roll into Savings: The History of the Industry’s First Rollaboard®

It’s hard to remember a time when it was a struggle to lug your luggage through an airport, but it did exist. Travelers had to literally manhandle their suitcases using the handles throughout the airport and to hoist 30 – 40 pound bags onto and off baggage carousels. But everything changed when one airline professional grew weary of the process and decided he could make it better.

Northwest Airlines 747 pilot, Bob Plath, crisscrossed the globe a thousand times over, suitcase in tow. He’d seen firsthand what happened to his luggage and those of others over time and saw the toll it took on travelers hauling it through terminals. He thought there had to be something better.

When he discovered there wasn’t, he invented it. 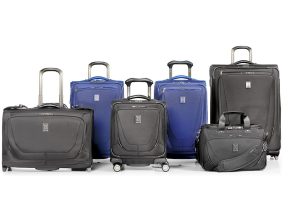 Travelpro Crew 11 Collection — with both spinner and Rollaboard bags

What Plath created in his garage in 1987 was completely revolutionary. Before his brainchild, all luggage was oriented horizontally. Heavy, inflexible suitcases with handles on top that had to be carried through airports. The only other integrated rolling option was a horizontal model featuring four small wheels and a strap for pulling, that collided with your heels due to the poor balance and ergonomics. Plath’s innovation began with reorienting his bag vertically, and placing larger, stable wheels and a retractable handle system.

Soon fellow pilots and flight attendants began asking him to make what he coined the Rollaboard® for them. When passengers began noticing and asking airline personnel where they had purchased their bags, Plath moved the operation out of his garage into a 185,000 square foot warehouse. He left Northwest in 1991 to focus solely on what has become the industry standard in luggage and the precursor to all other upright, wheeled luggage rolling through the world’s airports.

Today, our garment bags, suitcases, executive rolling briefcases, rolling duffel bags, rolling totes, and checkpoint-friendly backpacks are the choice of over 90 airlines and frequent travelers worldwide. This week, we’re celebrating how our founder’s revolutionary innovation changed travel as we know it by offering you 15 percent off all Rollaboard® models from our TPro® Bold™ 2.0, Maxlite® 5, Crew™ 11 and Platinum® Magna™ 2 series when you visit www.travelpro.com.

Are you old enough to remember those hand-carried suitcases? Or are you fortunate enough to have never been saddled with them? Do you have any great stories to share about the first time you ever used a Rollaboard, or the last time you hand-carried your luggage? Share them with us in the comments below, on our Facebook page, or in our Twitter stream.