Is it Time to Graduate from Backpack to Briefcase?

Since we already talked about how backpacks aren’t necessarily the slacker bags they once were, we tried to approach this as more of a probing to see whether and when it’s necessary.

You see them in the airport, on the street, and on the train. Their advocates are fiercely loyal. We’ve even addressed the appropriateness of carrying one. Other than a sense of style or an unwritten industry-specific standard, though, what are some reasons to graduate from a backpack to a briefcase? 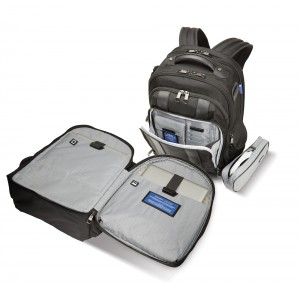 Perhaps you’ve been carrying a backpack since high school. You’ve changed styles, but you still perceive the flexibility that its unrestricted open compartment and deep recesses afford you for your essentials. It’s true, capacity is core to the design. But have you ever had to dig through each and every pocket in order to find what you really didn’t have time to look for? If you’ve never really compared the features of a backpack to those of a briefcase, you may be surprised to find the briefcase has benefits you may not have considered.

Travelpro’s Crew Executive Choice collection has a backpack and a briefcase, and both integrate fine leather accents and durable fabrics to create bags of outstanding functionality and craftsmanship.

The features are the same in the two bags, but the main difference between the two really comes down to bulk. The Checkpoint Friendly Computer Backpack is eight inches deep, while the Slim Brief is only three and half inches. You’re not going to have to choose between the two for durability, convenience, versatility or fashion. So what other reasons might cause you to take a look at a briefcase?

Maybe you just want to appear more professional. Maybe you want something that you won’t have to fight to slip under the seat in front of you on an airplane or between the seats in your rental car. Maybe you’re tired of the heat that carrying a backpack against your back creates as you hustle through the airport. Maybe you don’t need to carry as much as you used to, or you shouldn’t so your back doesn’t bear the brunt.

Is it time to graduate? Now you know the options are equal, the choice doesn’t have to be so difficult.

What do you carry? What would you rather carry? Leave us a comment below or on our Facebook page.