A version of this article was previously published on our Atlantic Luggage blog.

If you live in a small town or city, and you’re traveling to a big city like Las Vegas, Washington DC, Chicago, or New York City for a vacation or a business trip, it’s a bit tricky navigating your way around.

I grew up in New Jersey, close to New York City, so I’m used to being in the big city. If anything moving down here to Boca took a bit of an adjustment because everything moves at a slower pace and is more spread out.

But if you’re not used to 60-minute commutes, constant noise and traffic, and everyone moving and talking so much faster, it may be a bit of a surprise when you finally do get there. The people act differently, expectations are different, and things that seem very close on the map can take you 30 minutes just to get there by car.

If you’re visiting “The Big City” and you’re not used to it, here are a few tips that most big-city residents either take for granted or have forgotten. 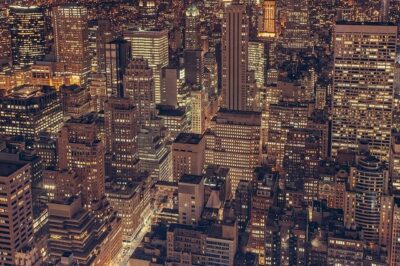 There’s no such thing as free parking in a city. It’s about as rare as an albino unicorn on roller skates. If any part of a street is empty enough for a car to sit for an hour, someone’s going to slap a meter on it. And if you do find public parking, the prices are going to be staggeringly high. In downtown Chicago, you can pay $50 to park from 8 AM to 5 PM. (No wonder Lyft and Uber took off in the big cities!)

Even if you stay at a hotel, you’re going to have to pay for parking too. Hotels in Washington DC can charge $50 – $75 per night for parking, and that’s if you’re a guest. If you just want to park as a visitor, it can cost more.

If you’re planning to stay in the city, research the different parking options before you get there. See if your hotel has parking and how much you could expect to pay. I’ve known people who will pay for long-term parking in a different location, like the airport, and then take public transportation or even ride sharing to get around. That may seem expensive, but long-term parking can be $10 – $20 per day, and hotel parking can be $50 – $100 per night.

2. Pick a hotel based on location, not price.

When you visit a new city, you may be tempted to pick the cheapest hotel, especially if you want to stay loyal to one brand. The problem is cheap hotels aren’t near the good locations, which means you’re going to pay more for convenience.

I’ve heard plenty of stories about people traveling to places like Chicago or Atlanta and staying in a hotel strictly based on the price, thinking they can save $20 per night because they were 20 miles outside of downtown. Those people end up spending $40 per day or more in taxis and rideshare cars, sitting for an hour or more — each way! — in rush hour traffic. That $20 bargain was no longer a bargain.

A cheaper hotel may seem like a good deal, but you’ll end up spending a lot of time trying to get to the place you wanted to be, either by taking taxis or taking your own car and paying for parking. If anything, you’ll end up spending more money to try to save money. Not to mention you’ll lose as much as an hour or two a day in your sightseeing or business plans.

3. Study maps and GPS apps before you go.

It’s a smart idea to plan ahead with the restaurants, coffee shops, attractions, events, and so on. You may even want to make those plans before you book your hotel so you can see your most convenient options. Use Google Street View to see what’s actually around your hotel and to figure out which areas are walkable and which require a car just to get in and out.

You don’t want to get to your hotel and find out that you’re on a busy 5- or 7- lane thoroughfare that you thought you could just stroll across at the red light, only to discover there’s no walkable part for a mile in any direction. If you can get a ride or have a car, it’s fine. But if you planned on walking a lot, you’re going to be in for a serious surprise.

4. Leave plenty of time to get where you’re going.

Traffic is inevitable in big cities. It’s like death and taxes: You can’t get away from it, and it’s always waiting for you. That means things are going to take longer than expected. If you see that your restaurant or museum is only a mile away, you might think you can drive that in two minutes, since the speed limit is 30 miles per hour.

All the city dwellers just laughed and laughed at that idea. Because what you didn’t realize is that generally, one mile equals 10 blocks. Blocks mean intersections, and intersections mean stoplights. And you’re on cloud nine if you manage to catch more than two green lights in a row.

Even driving a few miles across town can take you 30 minutes, even though it looks like a five-minute trip. You could get detoured, turned around, or stuck in traffic in the middle of the afternoon. So make sure you leave plenty of time to get to where you’re going, and show up early, rather than leaving on time and showing up 30 minutes late.

Use an app like Waze or Google Maps to not only check the traffic patterns an hour before you leave to see if there are any surprises like construction or a major accident. You can even do that if you’re using a ride-sharing service because your driver is going to be stuck in that traffic as they come to you. But they also know the city better than you, and they’ll know the side streets to use to avoid the worst of it.

5. Use ride sharing or taxis

I’ve traveled quite a bit for work to other cities, like Las Vegas and Chicago, and the smartest thing I’ve done is to leave my car in the hotel parking lot and take a Lyft. (You can also try the new Gett app for taxis.) I’m already paying for parking, but I’m not paying for additional parking, which could be $10 per hour. So every Lyft trip I take is probably going to be as much as, if not less, than the parking I was going to pay for.

And even if it does cost more, at least I’m not circling around for 20 minutes, trying to find a parking space or a lot that’s convenient (and not full!), which just wastes time. A rideshare or a taxi can drop me right at the door, and I don’t have to worry about parking or delays at all. I can just go door to door, and bound in and out of cars like a rock star.

How do you travel around a big city? Do you have any navigation tips for your city or for the metropolitan areas in general? Share your ideas with us on our Facebook page, or on our Twitter stream. You can also find us on our Instagram page at @TravelproIntl.