Van Life and the Growing Trend of Digital Nomads

There is an unconventional trend that is growing right now, a low-cost method of living and traveling that lets you go wherever and whenever you want. People are becoming digital nomads and are working and living out of converted vans, taking the tiny house movement to a new extreme.

Van living is like RV living, but things are even smaller and you don’t have all the same luxuries of the RV, like a tiny shower or composting toilet. What you have is total freedom to see the country or North America and a chance to cut down on expenses. And if you have the kind of career that lets you work remotely, or with sporadic wifi, you can cut down on living expenses and save a lot of money.

Here are a few examples of digital nomads, plus a way to live in 70-degree weather all year around.

In an interview with Dwell.com, entrepreneurs Lexi and Cody were asked about their way of life, living out of a Mercedes Van. Dubbed “Van-trepreneurs,” the duo has been working out of the van by making it a creative studio for their YouTube channel, blogging, branding products, and creating digital tools for people ho want to start businesses. The process is hard, but they take pleasure during hours of work while having the most beautiful backdrops around the country as they’re working. 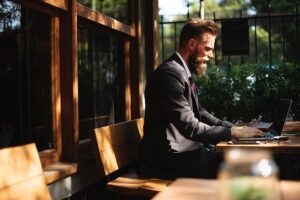 Yogi and Author Brittney Rouille told Forbes that she was becoming drained of the job she had before she decided to venture into the van life lifestyle. She explains that she was being overworked and underpaid for a demanding job at an eating disorder recovery center. Her partner, Drew Neumann, was also feeling passionless about his own job. So together, they decided to leave the lifestyles they knew to live out of their Mercedes Van.

While they attest to having a more fulfilling life that is more balanced, the sense of connection and disconnection is an ongoing struggle for them.

They did offer some advice for those considering the digital nomad lifestyle. They encouraged those who don’t want to be connected to wifi all the time to take six months off and six months on in order to be able to work and save up enough money. They also mentioned to not set expectations, just take the journey as it comes and try to live in the moment.

There is a company that is becoming a steeple in the #vanlife movement, but is bucking the trend of using regular size camper vans in the process. Yama rents out camper vans that are smaller than traditional RVS, which allow you to live outside of campsites for RVs.

Based in Canada, people are renting their vans to experience a freer lifestyle, unrestrained by physical limits. The company is also encouraging people to not work and focus on travel, if they are able to.

Living in 70-degree weather, year round

Yes, it is possible to live in 70-degree weather, all year round.

DoItYourselfRV.com featured a 70-degree year-round map that was created by climatologist Brian Brettschneider that dictates a route for such an endeavor based on extensive data research, which dates back to 1981. The journey begins in Mexico and ends in southern California. He also created alternative routes involving warmer climates in the Washington Post.

Jamie Cattanach of RVshare.com published a 12-month itinerary with the same goal. However, she starts in South Florida in January and her map ends at Tucson, Arizona in December. The benefit of this is that you can park your van for a month, get used to the surrounding area and get to know a few favorite places.

Going on the road as a nomad takes the right gear for the journey. You can’t just load up your car and go. You have to prepare. If you’re interested in converting your own van, or seeing how other digital nomads have done it, be sure to check out a few YouTube videos on the subject.

Have you ever considered becoming a digital nomad living out of a van? What about an RV? Have you ever taken an extensive RV trip? Tell us about your experiences on our Facebook page, or on our Twitter stream. You can also find us on our Instagram page at @TravelproIntl.