If you’re looking for some inspiration for your next trip, or even if you want to see what traveling was like 100 or more years ago, there are a few travel books that can give you a look at a different part of the world, focusing on the terrain, the people, and the culture.

Whether it’s a historic novel that’s nearly 150 years old, or a recent best-selling novel that was made into a movie, there are travel books that can give you a look at a different part of the world, and help you enjoy traveling the world in a different way. We found a few suggestions on Forbes.com and Travel & Leisure and added a few of our favorites.

1. Around the World in 80 days by Jules Verne

Published in 1872, the French author took it upon himself to write a work that was full of adventure and travel. He himself did not travel much outside of France, but he chose cities like Shanghai, China, San Francisco, New York, Hong Kong, and countries like India to become settings of his most popular novel. Readers are sure to enjoy such a book that entices the mind when it comes to experiencing the world. (He also wrote 20,000 Leagues Under the Sea and Journey to the Center of the Earth.)

2. Stories of Hawaii by Jack London

Best known for The Call of the Wild, London prided himself on going to Hawaii three different times (1907, 1915 and, 1916). He wrote a collection of travel books, each depicting his experiences there on the beautiful islands. The way in which he wrote these books are poetic in a sense, matching the spirit of Hawaii when natives talk about their beloved land. For instance, he writes about the “lofty Koolau Mountains’ trade winds” as “soft breathings, [when] the air grew heavy and balmy with the perfume of flowers and exhalations of fat, living soil.” 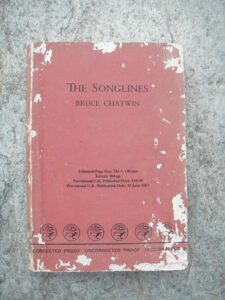 If you’re a fan of the little black Moleskine notebooks, you partly have Bruce Chatwin to thank for that. Chatwin was a well-known British travel writer in the ’60s, ’70s, and ’80s, publishing one of his most popular works, The Songlines in 1987.

The book contains both fiction and non-fiction elements meant to express the reality of Aboriginal Australians and their dreaming tracks, or “songlines.” “Each songline is a personal story and functions as a creation tale and a map, and each Aboriginal Australian has their own songline.”

4. A Moveable Feast by Ernest Hemingway

Ernest Hemingway is known by many as a fiction writer, but he did write about traveling as well. In “A Moveable Feast”, he wrote about his experience in Paris. With fiction and non-fictional narratives, he wrote about several experiences in different areas of Paris- from the Market Street of Rue Mouffetard to Les Cloiserie des Lilas, his favorite brasserie. Reading this book will sure create an appetite for Paris as it is known for travelers to see the romantic city through the eyes of Ernest Hemingway.

It may be a novel about protests, vandalism, and civil disobedience, but Edward Abbey paints a beautiful portrait of the desert and life in the American Southwest. Even if you’re not one who goes in for camping outdoors, especially in a place known for its reptilian life, you might find yourself reconsidering your stance when you read this book.

Abbey’s descriptions of desert life make it seem like a beautiful, vibrant place filled with amazing sights and colors, not just a sun-bleached, desolate land devoid of life that we often see in movies and on TV.

A modern book published in 2006, Eat, Pray, Love shares Elizabeth Gilbert’s journey to self-discovery and reawakening. In it, she writes about her trip through Bali, Rome and India.

Through such exotic places, she goes on a yearlong journey to discover herself further through art, love, divine connection and more. Released in 2010 as a film starring Julia Roberts, the book is sure to encourage the reader to find meaning for their true selves through unfamiliar places.

Writer Cheryl Strayed hiked 1,100 miles on the Pacific Crest Trail after her mother’s death. Through a series of flashbacks and updates on her journey, she reflects on her life growing up in Minnesota, and some of the bad choices she made that brought her to this point. Her hike is her chance at redemption, so she spends 94 days hiking from the Mojave Desert in California to the Bridge of the Gods on the Columbia River between Oregon and Washington.

What are some of your favorite travel books? Do you have any favorites that inspired you to visit another part of the world? Share them with us on our Facebook page, or on our Twitter stream. You can also find us on our Instagram page at @TravelproIntl.