Imagine living in a world where you can be in Los Angeles, and arrive in San Francisco in 30 minutes. How about flying in a self-flying helicopter, taking you somewhere that would normally take a couple hours to get to, but you can make it in minutes. This will be the future of travel, but maybe in the not-too-distant future.

Researchers and scientists are developing and improving this technology all the time, bringing what was once the realm of science fiction into the grasp of the everyday traveler. And many of these advancements are expected to be available within the next few years.

So how will these new modes of transportation benefit the traveler? Or the world? Let’s take a look to see what’s on the horizon for faster, safer, and more energy-efficient transportation.

In 2012, tech billionaire Elon Musk was frustrated with a proposed concept of a high-speed rail train that would travel from Los Angeles to San Francisco. It was slower than air travel, not to mention expensive to build and sustain.

As any innovator would do, he wanted to create a better solution to what the travel industry faces today. So he devised the Hyperloop.

This system uses underground tube structures to magnetically charge pods of people, propelling the pods at high speeds, alternating between pushing and pulling magnetic poles. If you’ve ever played with magnets as a kid, you know that magnets have a “pull together” attraction and “push apart” repulsion. Now imagine those two forces propelling a pod forward at a high rate of speed, pushing and then pulling the pod from pole to pole.

This system will be energy efficient in that it will use no fuel at all. And it will be time efficient, being twice as fast as an airline, and it will be safer, having minimal risk of collisions.

Tests will begin this year and public operation is expected to begin in 2022.

You may have heard of the concept before. You may have even heard it with the name Elon Musk attached to it. The concept is not new in thought, however it has not been available to the widespread public.

As technology develops and testing continues, the use of autonomous driving will become more apparent. In fact by 2030, BCD Travel predicts that 35% of road travelers can use autonomous cars for everyday travel. We’ve already seen self-driving cars plenty in the news, with the Google Car logging well over a million miles, so let’s see if we can finally see these reach the mainstream transportation market.

One day, getting stuck in traffic on the way to work will be a thing of the past.

Autonomous helicopters have been on the horizon for a while now, and we’re getting closer. As an answer to congestion on the road, companies have been wanting to develop a convenient solution in the air.

Bell Flight, Boeing, Volocopter, and Sabrewing are all getting into this arena early, hoping to bring eVTOL (electric vertical takeoff and landing) UAM (urban air mobility) solutions to the public by the year 2025.

Uber’s Air taxi service, Uber Air, is planning to employ Bell Flights first UAM model — the Bell Nexus — to be a part of its fleet of autonomous-flying copters.

The Concorde is making a comeback. . . sort of 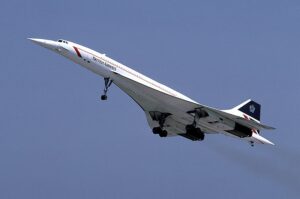 From 1976 to 2003, supersonic flight was achieved commercially through the Concorde. Unfortunately, its engineering could not keep up with the demands, and it eventually had its first and only crash, which grounded the Concorde for the last 17 years.

However, there has been a resurgence for not only supersonic but hypersonic flight in the works. UK-based Reaction Engines are developing engines that can fly at Mach 5, or 3,836 miles per hour. (That would get you from New York to Los Angeles in a little under an hour.)

Concorde was able to have passengers get from London to New York in three and a half hours. These new hypersonic planes will be even quicker than that. BCD travel expects this to be up and running around 2023.

What about space travel?

For right now, let’s leave the letting-humans-go-to-space-whenever-they-want-talk to NASA. But, this could eventually be a possibility. We’re not sure if we’re going to be vacationing on Mars or if we’re just going to take planes a lot higher to get around the world a lot faster, but space travel could happen within the next 50 or even 25 years for space tourists.

What do you hope to see for the future of travel methods? What kinds of modes of transportation would you like to see take off (pun intended)? Share your thoughts with us on our Facebook page, or on our Twitter stream. You can also find us on our Instagram page at @TravelproIntl.