When is the Best Time to Buy 2019 Holiday Flights?

Are you traveling for the upcoming holidays? Visiting family or escaping the craziness of family get-togethers? We already shop for Black Friday for deals on gifts so why not find the Black Friday for holiday flights?

We recently read on SmarterTravel.com that says right now is the best time. Historically the first week in September is ideal for Thanksgiving and Christmas and Hanukkah. However, if you’ve missed that train, other dates for deals are still available. 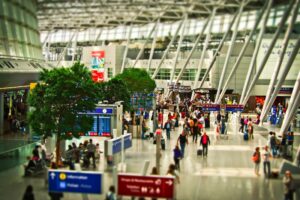 Thanksgiving flights are relatively cheap for the weeks of September 9 and 16 and again the weeks of November 4, 11, and 18.

Christmas fares are relatively low during the weeks of October 6, November 18, and, surprisingly, the weeks of December 2, 9, and 16.

Typically the best deals can be found three to four months in advance of your travel date. According to the article, airlines flying the 737 MAX may not have as much availability as usual.

Historically the lowest average Thanksgiving flights are available for the week of September 2 and increase slightly a month later. However, by early to mid-November they decreased slightly before they skyrocket the week of Thanksgiving.

Christmastime fares seem to be erratic, with larger week-to-week changes. Again, the first week of September seems to be the lowest. A slight increase usually comes a month later and is followed by slight changes until mid-November and early December. The middle of December typically sees increases and December 16 is the worst, surprisingly higher than last-minute fares during the week of December 23.

As expected, the earlier you purchase your ticket, the greater the opportunity for lower fares. However, you might want to wait for great promotional fares, but even they can be risky.

Bottom line: “When you find a good fare, pounce.”

Smarter Travel did a comprehensive breakdown of average fares for the mix of feasible departure and return days. The best times to travel, price-wise, are on Thanksgiving Day, Friday and Saturday. The worst days to travel are the Wednesday before and Sunday after each holiday.

Watch the news on those days and you’re guaranteed to see a reporter lost in a sea of tired, cranky travelers complaining about waiting and horrible service. So if you have to travel, leave a few days before and a couple days after the holiday to avoid the rush.

The bottom like for traveling on major holidays is that the lowest fares involve travelling on the holiday itself and the highest ones include returning on the Sunday after the holiday.

But if you have it in your budget, your best bet is to look beyond the dollars and focus on your convenience. Is the $100 savings worth it if you have to fight your way through angry mobs of holiday travelers and risk getting your flight canceled or seat bumped because the airline was overbooked? Give yourself a few days on either end and buy your tickets as soon as you can to get the best prices possible.

How do you make your travel arrangements? When do you typically buy your tickets? And when do you like to travel? Tell us about it on our Facebook page, or on our Twitter stream. You can also find us on our Instagram page at @TravelproIntl.