Is the Micro-cation the Newest Millennial Travel Trend?

A new travel trend called the micro-cation has appeared among the under-40 crowd and it’s surprisingly simple.

Millennials seem to have issues with vacationing. It seems — at least for them — highly coveted long vacations of lounging poolside, sightseeing and simple leisurely enjoyment of doing nothing isn’t all that it’s cracked up to be.

As to the “why” of this is, a lot of information isn’t clear. Some say it’s due to the planning and prep, others argue work stress. Finances, too, may prevent the trip, too.

They do like to travel, though, according to a recent Travel & Leisure article.

Think of it as the cousin of a long weekend getaway.

Fifty-seven percent of Americans did not vacation longer than 4 nights, according to a statement released by Allianz Global Assistance. Additional information from the 2019 Vacation Confidence Index, showed that 72 percent of Millennials had taken at least one of these “micro-cations” in 2018. Meanwhile, 69 percent of Gen X-ers and 60 percent of Baby Boomers “micro-cationed.” 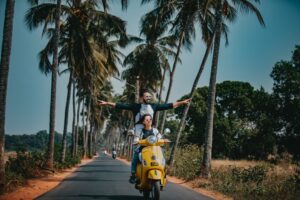 It seems millennials prefer these short jaunts and see them as a great way to get more miles for their travel bucks. Micro-cations allow these travelers to experience a large variety of places in short amounts of time.

Twenty-one percent of Millennials said their longest trips were three to four nights, according to Allianz Global Assistance. Only 12 percent said they enjoyed shorter trips lasting no longer than one or two nights. Nearly a third of them said they took at least three micro-cations in the entire year.

This idea can look inviting, especially if you prefer to be constantly on the go. Not only does the traveler see numerous places, it’s also an immediate reward for saving funds and avoiding saving up all year for one long vacation.

Week-long summer vacations may be disappearing, according to Daniel Durazo, director of communications at Allianz Global Assistance USA. He added that Americans, especially Millennials are keen on the idea of frequent travel. Micro-cations increase interest in domestic locations over international ones as well, Durazo said.

The bottom line for these short trips is the bottom line. Twenty-five percent of Millennials said they didn’t want to spend more money on a longer stay, according to the survey.

Millennials are not alone in their belief that “brief is better” when it comes to vacations. According to the survey, 40 percent of Gen X-ers said that it was easier to take time off work for a short trip. Baby Boomers said they used their time on vacation to attend an event, so they didn’t need more than five nights.

Of all the demographic age groups, Baby Boomers are least likely to take a micro-cation and are still most likely to not take a vacation at all, according to the survey.

What is your preferred vacation length? Do you prefer the two-week-once-a-year trip, or do you want to take a few vacations each year? Tell us about it on our Facebook page, or on our Twitter stream. You can also find us on our Instagram page at @TravelproIntl.