Hotel Wifi is a Hacker’s Dream

Hotel wifi is leakier than the Titanic. Your credit score and your finances may “go down with the ship” if you’re not careful.

According to an article in The Guardian, hackers love hotel wifi because it’s unsecured and easily hackable, allowing them to spy on guests who do personal banking and finance on their laptops at night. 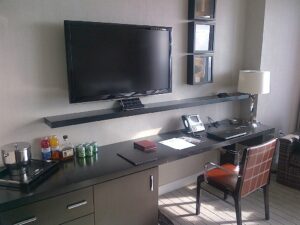 While you may take the opportunity to pay some bills while at a hotel, you might want to think twice. Free wifi may prove costly in the long run as hackers hover, waiting with bated breath to do some shopping courtesy of your bank account.

Listen to your gut which is yelling “don’t do it” and not your heart which pleads “that bill needs to be paid NOW if you want to keep using the card this trip.”

Here are a few rules you should follow when you’re traveling if you want to keep your personal information safe.

The Guardian article reports that many of the hospitality industry’s biggest operators have reported data breaches in recent years. Names like Hilton, InterContinental, Marriott and Hyatt have made the news for their data hacks, with hackers gaining access to credit cards and passwords. Most of these attacks were focused on the property management systems (PMS) used by hotel chains for basic operations such as taking reservations, issuing room keys and storing credit card information.

Mentioned in the article is a Bloomberg report which shared how a team of hired hackers were able to access a hotel’s PMS system simply by plugging the Internet cable from a television into a laptop. From there they were able to access the chain owner’s corporate system, which opened up the several years’ worth of transactions in numerous hotels. Selling this information would have reaped a fortune for a bona fide hacker.

But why are hotels easy targets? According to the article, it’s because their systems are so vulnerable and easy to penetrate technically. It’s also a reflection of an occupational culture. Since free wifi is expected virtually everywhere, those in the service industry are looking for hassle-free ways to fulfill customer needs. Why make a guest contend with passwords and login procedures when they don’t have to? This is seen as easy and worry-free to the hotel and the guest, as well as the hacker who can get credit card information in a few steps.

So what’s a traveler to do? Simply stated, invest in virtual private network (VPN) software and install it on any device you take when you travel. It works like an encrypted tunnel to a special server located somewhere on the Internet.

So, let’s say you’re in your hotel room and want to pay a bill. If you connect to the Internet through a VPN, the VPN connects to your bank on your behalf. Because the Internet traffic is encrypted, it’s garbled to the hacker. Your VPN will protect your sensitive information whether your in your favorite coffee shop, vacationing on a beach or hard at work in a hotel room.

Protection comes at a cost, though and it’s typically an annual fee. Some free services are offered but they may limit data usage or the number of services you can access. However, you can get some great deals on VPNs at StackSocial.com, paying 80% less than the normal price for lifetime subscriptions.

Bottom line: Investing in your own virtual private network is worth it since hotel wifi systems are so vulnerable.

Have you ever been the victim of a hacking attack on hotel wifi? Or do you take precautions when you travel? How do you keep yourself protected? Tell us about it on our Facebook page, or on our Twitter stream. You can also find us on our Instagram page at @TravelproIntl.