How Will 5G Change Business Travel?

According to a recent Travel Weekly article, 5G, the emerging fifth generation of data connection speeds, could have a major impact on the travel industry.

The good/great news is that 5G networks will enable vast amounts of data to travel at high speeds. The bad news? It’s about five years away.

The high-bandwidth network has the potential to quickly download an HD movie to a smartphone or even do something as remarkable as robotic surgery with the doctor using robotics in another part of the world. And the best part is that the speeds are so fast, there’s no latency or delay. The doctor’s commands would be received by the robot surgeon in 1 to 2 milliseconds. (For a point of reference, it takes roughly 400 – 500 milliseconds to blink your eyes. And you just blinked to test, didn’t you?)

“The value of a low-latency, high-bandwidth wireless network is limited only by your imagination,” said Shelly Palmer, a strategic consultant and CEO of the Palmer Group, told Travel Weekly. “Where can you either increase people’s experiences — so, make a better experience for your customer — or cut costs? Those are the things it’s going to do. It’s going to enhance experiences and cut costs.”

So how did we get to 5G? It started in the 1980s with mobile phones making basic phone calls. A decade later we had text messaging through 2G. The late 1990s saw the birth of 3G networks, and with them, Internet connectivity. Further enhancements in connectivity brought streaming audio and video in the late 2000s.

Sanyogita Shamsunder, vice president of 5G ecosystems and innovation at Verizon, said networks have evolved to “do more and more of the stuff that people are able to do in a stationary environment like at home or in an office.” 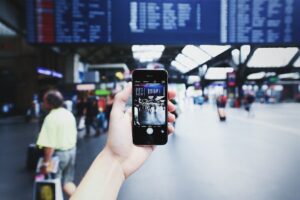 Noah Kimmel, IBM’s transformation executive for travel and transport, sees great potential for 5G supporting the “internet of things,” because it will enable machines to communicate directly with each other.

“If we think about it like a highway, we’re getting wider highways with faster speed limits with more cars on them,” Kimmel said. “Historically, as we’ve looked at devices connecting, we’ve talked about connecting people and then maybe connecting some devices and a lot of one-way communication. 5G will enable us to have massive machine-to-machine communication, which we don’t really do a lot of today, so that has the potential to be really revolutionary.”

Uses for 5G in Family and Business Travel

5G will undoubtedly have an impact on the travel industry at both a consumer-facing and operational level.

“If your traveler has a 5G connection, that means you should be able to have [better] video calls with your traveler, you should be able to be there with them, assisting them along the way,” Norm Rose, senior technology and corporate market analyst at Phocuswright said. “I think that’s the opportunity for 5G with the traditional travel agency community: to extend that relationship throughout all elements and all parts of the trip.”

Another impact is on rental cars as autonomous driving cars become part of the inventory.

“Autonomous driving becomes significantly safer when cars can talk to each other,” Kimmel said. With 5G, “it’s not just using cameras, but it’s communication between them, and that will change traffic patterns.”

The vehicle would be able to communicate its renters’ fuel, mileage, and any damage instantly to the company. Roadside emergencies would be immediately sent to the company. 5G will greatly improve cars that offer driver assistance. In addition to making them safer, it will also likely make the technology less expensive.

And because 5G has such fast rates, the actual computing can take place in the cloud, communicating instantaneously with the car.

At sea, 5G networks could be placed on cruise ships, enhancing operations and the onboard consumer experience.

Meanwhile, a hotel might be able to use 5G to track guests, and by doing so, notice they tend to leave the gym and head to their room without using communal shower facilities near the gym. They could make changes to that space to make it more useful, depending on how they interpret the data.

“For the travel industry, I don’t think there’s a need to do anything more than pay close attention to the evolution of consumer 5G devices and their deployment,” Palmer said.

But the industrial uses of 5G, as they are developed, are of far more interest.

Are you looking forward to 5G for business travel? How do you think you’d be able to use it? Will it make a difference in the way you do business or communicate? Share your ideas with us on our Facebook page, or on our Twitter stream. You can also find us on our Instagram page at @TravelproIntl.