American, Delta Ban Smart Luggage If Batteries Are Not Removable

If you received smart luggage for Christmas, we don’t mean to spoil your new year, but three major airlines — American, Alaska, and Delta — have already banned suitcases and carry-on bags that are equipped with integrated lithium-ion batteries and external charging ports.

In short, if you cannot remove your battery from your smart luggage, you can’t use the bag on those airlines. 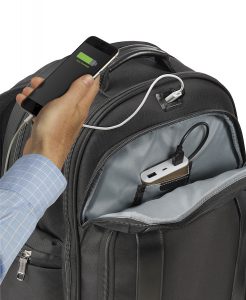 If you bring your luggage into the cabin, you can leave the battery in place, but you must have the option to remove it in case the airline needs to move everyone to a smaller plane.

The airlines cited concerns about inflight fires, as happened with the now-famous Galaxy Note 7 smartphones and kids’ hoverboards. You may also remember the Federal Aviation Administration’s short-lived ban on laptops with the same batteries in cargo holds on incoming international flights.

The ban goes into effect January 15 on American, Delta, and Alaska Airlines, even as United Airlines says they will soon follow; Southwest Airlines is reviewing their policy as well. Delta’s statement cited “the potential for the powerful batteries to overheat and pose a fire hazard risk during flight.” American declared its internal safety team evaluated these bags for necessary “risk mitigation” and deemed they “pose a risk when they are placed in the cargo hold of an aircraft.” 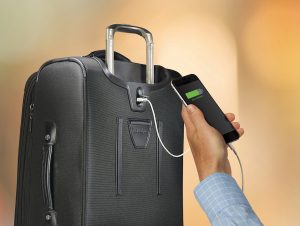 The Crew 11’s built-in power port is a great way to keep your mobile devices powered up and ready to go, but you can still remove the battery.

Before you return your smart luggage, make sure your replacement bag has the option where the battery can be removed or disconnected. Even if you toss the battery into the main compartment of the luggage, you can carry the bag onto the plane with you. But it has to be removable.

Travelpro has two Collections which feature a dedicated exterior power bank battery pocket which allows users to insert their own battery, connect a charging cable, and make use of an external USB port. Because the battery is not provided by the company, nor is it integrated into the hardware of the suitcase’s frame, travelers can remove it at any time within seconds. This puts all Travelpro’s luggage in compliance with any airline or FAA policy, current or future.

The collections which feature the dedicated power bank exterior pocket and external USB port include:

The FAA has a longstanding policy of banning spare lithium-ion batteries in checked luggage, while allowing passengers to stow them in carryons.

Did you get a smart bag for the holidays? How does this news impact you?on our Facebook page, or in our Twitter stream.